The city of Bogota has launched free online courses covering emerging technology such as blockchain and artificial intelligence. The courses seek to give the people basic understanding of these technologies and spur innovation in the South American country.

The courses are sponsored by the office of the Mayor of Bogota and are available to citizens above the age of 14. Other than blockchain, the other areas include cloud computing, artificial intelligence, big data, the Internet of Things and event-driven architecture. Each course has a basic and intermediate level, with each level taking four weeks to complete.

Under basic blockchain, the citizens get to learn “the meaning of blockchain, its advantages and disadvantages, the areas in which it exercises most strongly, the entry into the financial market, the use of Bitcoin and the impacts on the transformation processes in companies in the digital sphere.”

In the intermediate level, they will learn about the application and operation of blockchain, with the course describing it as “an alternative to maintain a permanent and secure record of information on monetary transactions, but whose potential is still much to be explored.”

Colombia is one of the South American countries that have sought to maximize on blockchain and digital currencies to grow their economy. Bogota, being the capital and largest city, has been the epicenter of this push. In 2019, the city hosted the Expo-Bitcoin International which brought together over 25,000 digital currency enthusiasts. The conference had over 200 commercial stands, with thousands of items on display. What was unique about them was that they only accepted payments in Bitcoin SV, an iconic display of BSV’s status in South America.

The Council of Bogota also recognized Dr. Craig Wright as Satoshi Nakamoto in 2019. Dr. Wright had been invited to speak about Bitcoin on the sidelines of the Expo-Bitcoin International conference. After his talk, the Council awarded him an official honor on behalf of the city, acknowledging his revolutionary work with Bitcoin. 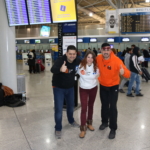