In 2020, Robinhood’s cryptocurrency division had an average of about 200,000 new customers trading on its platform each month, according to the company’s blog post.

A Robinhood spokesman declined to comment on the total amount of customers trading in the cryptocurrency market through the app, which also offers stock and options trading.

The price of Bitcoin increased by more than 300% in 2020 and this month reached a high of $ 58,354 while the market capitalization jumped from $ 1 trillion.
Dogecoin has also driven a crazy rally driven by the frenzy of micro-investor trading fueled by social media that has pushed up the stock of companies like GameStop.

Dogecoin was created largely to satirize the 2013 cryptocurrency frenzy, it is still traded and its price fluctuates widely.
A tweet earlier this month by billionaire businessman Elon Musk in support of Dogecoin led the currency to rise more than 60%.

Robinhood currently allows customers to buy, sell and hold cryptocurrencies and recently stated that it intends to enable customers to retain and withdraw them in order to transfer them to other “wallets”.
In January, Robinhood angered some of its customers when it temporarily disabled a feature in its app that allowed users to buy instant batteries due to the investment frenzy that accompanied the GameStop case.
Robinhood is expected to make an initial IPO valuation of more than $ 20 billion this year. 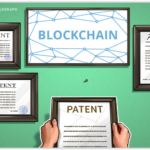 The US is number one…in blockchain patents

But the company with the most patents isn’t even American.…