Relatively recent experience in containing outbreaks of Ebola in Africa has allowed its nations to effectively contain the spread of coronavirus. Many African countries have quickly deployed effective track, trace, and quarantine measures of the kind that have been remarkably absent in the US and Europe. However, the economic impact of the virus is hitting parts of Africa in other more indirect ways.

The World Bank projects that the value of remittances to Sub-Saharan Africa will decline by around 9% in 2020 due to the global recession caused by the pandemic. In a region where many families depend on remittances from members abroad, the fall is likely to result in an increase in food insecurity and poverty.

Furthermore, the World Bank has found that the cost of sending $200 worth of remittances to Sub-Saharan Africa is around 8.5% – among the most expensive in the world. However, it also identifies that developing digital technology is an area that can help alleviate the cost of remittances. Reducing the cost would help boost the value of payments from abroad, helping offset some of the negative economic impacts of the COVID-19 crisis.

Given the low cost of sending payments via a blockchain, it seems likely that the technology could have a significant role to play in reducing the cost of remittances to Sub-Saharan Africa. It’s one area that blockchain development firm Jelurida has identified where blockchain could make a significant difference in the lives of people living in Africa.

Through its African branch, Jelurida Africa DLT, the company works with local enterprises to help them implement its blockchain-based solutions into their businesses. Jelurida operates the Ardor multichain platform, which has an innovative parent and child chain structure. Anyone can use Ardor to set up their own child chain for any use case.

Bitswift is one such example. It has been operating for the last six years and made the decision to move its blockchain architecture onto Ardor in 2017. Bitswift is a combination of companies and an online community that works together to promote healthy digital lifestyles. Its Bitswift.cash branch allows anyone to participate in the blockchain-based token economy, providing a low-cost means for any two parties to transact value. It’s designed to appeal to even non-technical users who want to reap the benefits of token markets, making it a workable solution to the challenge of high remittance costs.

Unlocking the Potential of Sustainable Energy

Blockchain also offers significant potential in other areas, beyond pure payments, that could help innovators looking to solve challenges in African nations. For example, many African countries remain heavily dependent on fossil fuels, which may be hampering investment in renewable energy sources, according to the United Nations. Nigeria alone subsidizes the production of fossil fuels by up to $2.5 billion each year.

Therefore, it’s essential to remove barriers to more sustainable means of energy production. Through its Swiss entity, Jelurida has been working with a project collaborating with the Austrian government and aimed at recycling waste heat energy. The project is called “Hot City,” and it uses gamification to crowdsource waste heat that can be recycled back into the energy grid. Citizens can be rewarded for their efforts in identifying these sources using blockchain-based tokens, which are secured using the Ardor platform. Although it’s currently operating in Vienna, such an initiative could be even more valuable in a city like Lagos, which has around seven times the population. It could reduce the dependence on fossil fuels, helping to save costs, and also combat the effects of climate change.

Jelurida has also recently been a key participant in the Africa Blockchain Developers Call series, showcasing various applications built on the Ardor platform, including a Smart Voting Bot application and GiveSafely, a secure system for charitable donations.

In a continent as vast and diverse as Africa, there is no “one-size-fits-all” solution to any issue. However, blockchain technology is versatile enough to address many of the specific challenges faced by African countries. Jelurida Africa is putting the focus on education and innovation to help businesses and entrepreneurs to unlock the true benefits of blockchain. 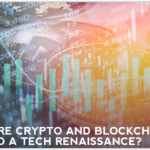 ARE CRYPTO AND BLOCKCHAIN KEY TO A TECH RENAISSANCE?

A former director of the US Mint thinks that the…