Revolut, a UK-based payments unicorn, has reported a significant jump in the number of its clients trading cryptocurrencies on its application.

According to the data published by the payments company, the number of Revolut users trading digital currencies surged 68 percent in April.

The massive spike in demand in Bitcoin and other cryptocurrencies was witnesses following a 52 percent drop in the average value of each trade in March. Towards the end of April, the average sum of digital currencies purchased by each user also jumped by 57 percent.

The London-headquartered company also detailed that the demand for Bitcoin remained the highest, with 51 percent of all traders coming from the digital currency in March and April.

Demand for Ripple-issued XRP remained second with 20 percent of all trades, while Ethereum remained 14 percent. Litecoin and Bitcoin Cash together remained in the fourth position with 8 percent trades for each.

Revolut also revealed a strange co-relation between user age and interest in crypto. According to the platform, 55 to 64-year-old customers averaged $423 in each transaction, while 18 to 24-year-old traders averaged nearly $134 for every trades.

Revolut is a major challenger bank based in London and has a total user base of 10 million. The platform’s user base is concentrated in the UK and Europe, however, it also has an international presence in Singapore, Australian, and the United States markets.

The platform revealed that the interest in digital currencies among the UK-based clients exceeded the demand from European clients.

Meanwhile, with the impact of Brexit, Revolut has launched a licensed banking entity in Lithuania and migrating the accounts of its East European clients to that. 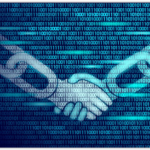 The alliance between Chronicled and Deloitte intends to enhance security…