In 2013 the world saw the debut of the first-ever Bitcoin ATM when a company called Robocoin placed a machine in a Vancouver coffee shop. Allowing customers to trade Bitcoin for cash, and vice versa, the machine saw $10,000 in BTC transacted on its first day.

Now that we are a month away from the end of 2020, the estimated number of crypto ATMs around the world that allow customers to buy and sell Bitcoin (BTC) and other altcoins for cash is about 11,665 ATMs, according to CoinATMRadar.

CoinATMRadar also shows that the number of crypto ATMs is constantly increasing by an average of 23 machines every day, or nearly one new ATM per hour.

There is also a growing diversity of the spread of crypto ATMs within the United States, with locations in small shops, shopping centers, transportation hubs, and even one in the Tesla Gigafactory.

Rounding out the top five is Canada, ranked second with 880 ATMs; the United Kingdom at third with 268 machines; Hong Kong in fourth with 62 machines; and finally Colombia, which recently showed great interest in establishing crypto ATMs with 59 machines.

As for Africa, South Africa occupied the leadership of the continent with 6 machines, but it should be careful, as Nigeria, the largest economy in the continent, has shown growing interest over the last year.

At the level of companies that manufacture crypto ATMs, Genesis Coin ranked first in the world, with the San Francisco-based company spreading 4000 crypto ATMs around the world, followed by General Bytes with 3442 ATMs.

The significant growth in the number of crypto ATMs in 2020 demonstrates the growing interest from both retail buyers and financial institutions, including financial behemoth Paypal. 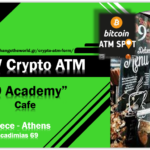