The correlation of crypto assets with traditional assets, such as shares, has increased significantly

Crypto assets such as Bitcoin have evolved from a “dark” category of assets with few users to a revolution that raises concerns and fears about financial stability, according to an analysis by the International Monetary Fund.
The capitalization of cryptocurrencies in November 2021 reached $ 3 trillion from $ 620 billion in 2017, due to the growing popularity among both small shareholders and institutional investors, despite high volatility.
This week, combined market capitalization fell to about $ 2 trillion, still up nearly fourfold from 2017.
Due to wider adoption, the correlation of crypto assets with traditional assets, such as stocks, has increased significantly, which, according to new IMF research, reduces the perceived benefits of diversification and increases the risk of a shock to financial markets.

Bitcoin and shares are moving together

Prior to the pandemic, digital assets such as Bitcoin and Ether had little correlation with major stock indices, as they were thought to help diversify risk and hedge against fluctuations in other asset classes.
This changed after the emergency support measures and the liquidity tsunami that the central banks injected into the markets in early 2020.
Cryptocurrency valuations and US equities have risen thanks to loose financial conditions and increased risk appetite on the part of investors.
For example, the performance of Bitcoin did not move in parallel with the barometer index of the US stock market S&P 500, in the period 2017-2019.
The correlation coefficient of their daily movements was only 0.01.
However, this index jumped to 0.36 for the period 2020-2021, as assets moved more slowly, rising together or falling together.
The strongest correlation between cryptocurrencies and stocks is evident in emerging market economies, many of which have adopted them as means of payment.
For example, the correlation between the returns of the MSCI Emerging Markets Index and Bitcoin was 0.34 in the period 2020 – 2021 – an increase of 17 times compared to previous years.
Stronger correlations suggest that Bitcoin functions as a risky asset.
Its correlation with stocks has become higher than that between stocks and other assets, such as gold, investment bonds and major currencies, indicating limited risk differentiation benefits as opposed to what was initially perceived.

The ripples in the cryptos

The increased correlation of cryptocurrency stocks increases the likelihood of diffusion of the investment climate between these categories of assets.
Indeed, according to the IMF, the spreads of Bitcoin returns and volatility in the stock market and vice versa have increased significantly in 2020-2021 compared to 2017-2019. Bitcoin volatility explains about one-sixth of the volatility in the Wall Street S&P 500 barometer during the pandemic of about one-tenth – and one-tenth of the S&P 500’s volatility.
Therefore, a sharp drop in the price of Bitcoin can increase investors’ aversion to risk-taking and lead to a drop in stock markets.
The reversals – that is, from the S&P 500 to Bitcoin – are on average of a similar magnitude, suggesting that emotion is being transmitted from one market to another in an asymmetric way.
Similar behavior is visible with stablecoins.
In particular, the IMF analysis shows that spreads between cryptocurrencies and stocks tend to increase episodes of instability in financial markets – such as the March 2020 market turmoil – or during sharp fluctuations in Bitcoin prices, as observed in the beginning. of 2021.

IMF analysis shows that digital assets are no longer on the margins of the financial system.
Given their relatively high volatility and valuations, their increased co-operation could soon jeopardize global financial stability.
So it’s time for regulation, the IMF concludes 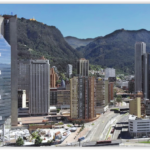 The city of Bogota has launched free online courses covering…